The Mortgage Origination Program (MOP) is a recruitment tool to assist qualifying new faculty in purchasing their first home in the Bay Area using a below-market rate mortgage. Eligibility for MOP participation is restricted to faculty with appointments in the Academic Senate series (Professor/ Ladder Rank, Professor In Residence, or Professor of Clinical X) or members of the Senior Management Group (SMG) within the first two years of their eligible appointment. Faculty with appointments in the Adjunct or Health Sciences Clinical series are not eligible to participate in this program.

This is not an entitlement program but a recruitment and relocation assistance program and as such is not available to all faculty.

What Faculty Need to Know

The Mortgage Origination Program is a pre-approval program and candidates must have a pre-approval certificate before placing offers if they would like to utilize University financing.

The Mortgage Origination Program provides first deed of trust variable rate loans with up to a 30-year term; not to exceed a loan-to-value ratio of 90% or a maximum income-debt ratio of 48%. The minimum Standard Rate under the program is 3.25%.  There is also a 5/1 MOP by which candidates may lock in a (usually higher) fixed rate for the first five years, after which the loan converts to the Standard Rate (variable).

How much can I borrow?  What can I afford?
You can estimate qualifying loan amounts, monthly payments, taxes, and closing costs using the MOP Loan Calculator.

Comprehensive overview and next steps:
For recruits with an appointment pending approval.
For newly recruited faculty who have begun their appointment.

The Office of Loan Programs (UCOP)

MOP loans have a variable rate, but it is lower than typical variable rate mortgages found in the market and does not fluctuate like rates do at lending institutions.   Bank lending rates are based on a variety of indices and factors, none of which apply to the MOP rate.

The UC Regents fund the Mortgage Origination Program by an allocation from the University of California Short Term Investment Pool (STIP); these funds are invested in faculty mortgages rather than in the pool.  As such, the MOP rate is indexed to the income rate of the Short Term Investment Pool.  Under this structure, the MOP rate is lower than commercial lending rates and is not subject to the same market conditions.

There are two considerations in determining the MOP rate: the Calculated Rate and the Program Rate.

The Calculated Rate is the four-quarter average of the STIP rate plus 0.25% servicing fee.

To avoid IRS imputed income rules and to keep the program solvent, the program also has minimum rate.  The minimum program rate was initially set at 3.0%. was briefly adjusted to 2.75%, and was ultimately set to the current Minimum Program Rate of 3.25%.

Each quarter the Office of Loan Programs issues the effective Program Rate, which is the higher of the Calculated Rate or the Minimum Program Rate.

It should be noted that because the rate index is sufficiently lower than the floor, the effective MOP rate has been at the Minimum Program Rate since August of 2010. 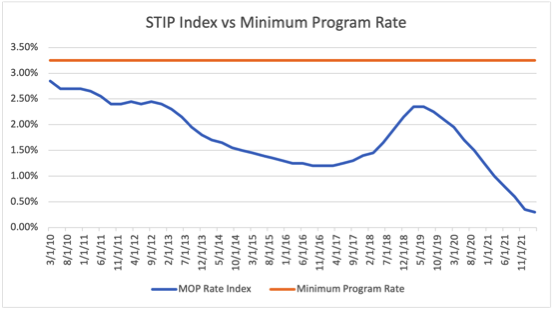 While the Mortgage Origination Program has an adjustable rate which can vary, it has not been adjusted in more than a decade and would only increase if the index plus servicing fee (the Program Rate) rise above the Minimum Program Rate of 3.25%.

However, the MOP rate is adjustable, and if the calculated rate does rise above the minimum program rate after funding, your loan rate would only be adjusted once annually on the anniversary of the loan. Should there be a rate adjustment, the MOP rate is prohibited from being adjusted (either up or down) by more than 1.0% at any given adjustment time, and features a lifetime cap of 10% over the initial rate.

There is also a 5/1 MOP program which allows for a fixed rate for the first five years at a higher rate, after which the loan converts to a standard MOP loan.  Details on the 5/1 MOP and the derived rate may be found at http://www.ucop.edu/loan-programs/loan-programs/5-1mortgage-origination-program.html.

Department managers may request a MOP allocation reservation and participation in the program for eligible faculty within the first two years of their appointment into a Ladder Rank, In Residence, or Clinical X title by completing the MOP/SHLP Allocation Request Form, affixing the signature of the chair, and submitting it to the Director of Academic Affairs in the appropriate dean’s office with a copy of the fully-executed offer letter.  The faculty member should not complete this form.

Requests for participation may also be submitted as part of a retention effort.  For these cases, contact the Home Loan Program Manager (Wilson Hardcastle) regarding the request.

The following information is to facilitate department managers and academic personnel representatives in requesting faculty participation in the home loan program.

The following are links to more detailed resources governing the University of California Mortgage Origination Program.  These pages and documents are provided by the Office of Loan Programs (OLP) at the Office of the President (UCOP). Please note that each campus has its own restrictions and procedures regarding the program.

To avoid conflicts of interest, the University of California does not recommend nor endorse individual real estate agents.  Individual faculty, however, are free to make recommendations regarding their experiences in the home-buying market and may recommend (or not) specific agents who were successful in assisting them with a home purchase using UC Mortgage Origination Program (MOP) financing.

The following real estate agents have been personally recommended by faculty who have closed on a MOP home purchase in the past few years. The University of California and UCSF make no endorsement nor attestation regarding these agents, nor is the University responsible for their conduct should you engage them.  This list is provided as an informational resource only as it may assist new or relocating faculty to identify a real estate agent experienced with the Mortgage Origination Program who satisfies their individual needs and preferences. It is important to review potential agents for yourself and decide who best suits your style, location, experience, and other needs.  See also: Tips for finding a realtor.

There are well over 4,500 realtors covering San Francisco listed on sfrealtors.com alone, and there are many other resources and reference sources. Realtor.com offers these descriptions of the terms for real estate sales professionals:

Search online: A Google search will provide several reference sites. Look for someone with experience and familiarity with your interests and areas of interest. Popular local sites for residential real estate information include zillow.com and sf.curbed.com. The San Francisco Bay Area and UCSF are committed to sustainability, and for energy savings and environmental concerns you may want to look for the term “eco-broker” in agent profiles. The San Francisco Association of Realtors is online at www.sfrealtors.com.

Ask around: The best referrals may be from people you know. Put word out to the faculty and staff in your department that you are looking for a real estate agent, and ask if they can recommend someone with whom they have had a positive experience. Other faculty may be best suited to understand your needs as a faculty member and your particular work/life interests and potential neighborhoods.

Look around: Saturdays and Sundays from 1:00 to 4:00 pm, drive or walk to open houses in your neighborhoods of interest. You may find a good home, and possibly a good realtor. Feel free to approach other buyers or sellers and ask about their experience.

Interview potential agents: It is always good to interview at least three realtors before beginning your property search. HowStuffWorks.com has several recommended questions to ask your realtor. Some specific questions to consider:

Consider calling a real estate broker or manager at one of the more successful or popular companies in the San Francisco Bay Area and ask for a “buyer’s agent interview.” Ask if they have any agents who are experienced with working with UCSF faculty.

Trying to calculate mortgage payments in general?  There are several mortgage calculators online and BankRate.com offers a simple one which may be helpful.

Heath Sciences Clinical Professors are not eligible to participate in the UC home loan program. However, BBVA and Union Bank offer home loan programs specifically for clinicians and doctors. The University makes no endorsements regarding these programs but provides this information as alternative resources which may benefit clinical faculty.

In October 2020 UCSF announced an affiliation with Landed, Inc., a personal finance company that will help interested UCSF employees purchase a home through Landed’s home buying assistance programs. Landed is not affiliated with and cannot be used in conjunction with the Mortgage Origination Program. This is a distinct program which may benefit both those eligible and those ineligible for the MOP, including UCSF faculty and staff. The campus affiliation with Landed is managed through Campus Life Services, and you can find more information on their website here, or https://www.landed.com/ucsf, or by sending an e-mail to [email protected].